A Day Trip To England

Today's holiday action featured a jaunt south of the border down Kielder way where Matchgirl (and I) checked out part of the route of the marathon she won't be running on Sunday.

Our Borders trip was planned a while back, based around The Running Queen's latest athletic endeavour. However, a pulled crankshaft, a torn linguine or some other sporting injury (I'm no expert) put paid to that. She's recovered now, you'll be relieved to hear, but not in time to get back to peak fitness for the Kielder Marathon.

As the weather continues amazingly hot and sunny we spent much of the day along the shore of Kielder Water where we enjoyed views of water and pine trees, brief glimpses of a fox, a red squirrel, several rabbits and a toad, and more water and pine trees.

The views are great, and very relaxing, but little sparked the creative juices and that which did produced no snaps worth keeping from the day out, so the best I can offer is another lunar portrait, snapped in daylight this morning.

I may have missed the recent red moon, but how many people have captured a blue moon? 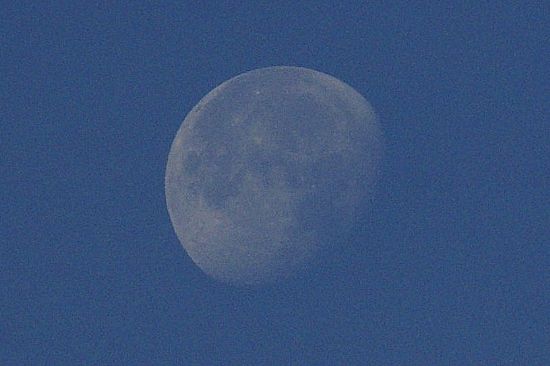