The Hunters And The Hunted

All creatures squeaky and small continue to have a hard time around The Rural Retreat, although for a while at least one appeared to have the upper hand.

The pile of innards on the kitchen floor turned out not to belong to the escaped shrew brought indoors by a questing feline, as I realised on Saturday when I saw movement in Matchgirfl's sofa blanket and uncovered a fugitive who'd found a hiding place beneath the cushions. It could have survived for days on the crumbs I also found there.

Cats also noticed but the shrew escaped unharmed before I could catch it. This was a bad move – not long afterwards I left for City Limits' appointment at Johnny Foxes and returned in the small hours to find a dead but otherwise undamaged shrew on the kitchen floor, a couple of feet away from half a vole.

Yesterday, another vole was freed from Willow's unwanted attention; today, The Grey Streak brought in a mouse, which got away, but was later seized by Pandora and carried outside. A rescue was effected but the victim's limp suggested that its future was far from assured.

Maia, apart from crouching and watching, has taken little part in hunting expeditions, although she still sneaks out now and then, probably to check the status of the neighbouring cat-flap – something observed by Soo during cat-sitting duties and captured by her camera. 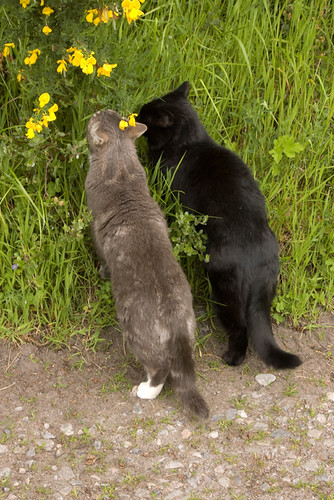 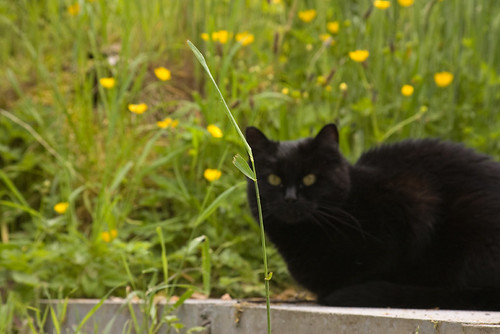 Despite how it looks, Maia is still a chunkier cat than Pandora. Right: Maia mesmerised by a grass stem.

Because rain fell all of yesterday, and much of today, the Pentax has been unused, so here are a couple more snaps from Saturday afternoon's jaunt up the lane. There might be more tomorrow, but as rain and long days have combined to return the garden to an almost post-Grasmere state I may be too busy with mower and clippers.

Band Update: City Limits enjoyed another good night at Foxes, a quietish first set being more than compensated for by a raucous second one, although an over-enthusiastic punter dropping a pint on Keith's pedal-board was an unfortunate climax. The damage has yet to be assessed but the fan has promised to pay. We'll see. The management has promised to be in touch about more gigs. We'll see about that too.