We're home. The garden looks like it's not been touched for a month and The Pride is treating us as though we've never been away. It's raining.

If you've been eagerly awaiting the final instalment of the holiday blog (hello, Cathy), I have excuses.

Thursday found us back on four wheels and in Yorkshire, first catching up with family gossip in Wakefield after some tedious main roads, then returning to Grasmere via the Dales, which was much more pleasant. The only disappointment was that we hit Masham just too late for tea at my favourite market square cafe. Maybe next year. No snappery happened either.

Early evening found is back at Dove Holme Cottage where an indoor picnic was enjoyed and I was disinclined to blog. We were on holiday, after all.

Then our week was over. At 10am yesterday we left the Lakes and set off north via Kirkstone Pass (Matchgirl was not as impressed as she'd been by Wrynose and Hardknott) and Ullswater to Penrith where I planned to catch the A6 further north – something I did after a missed turning (it's a while since I've been through Penrith) and negotiating back lanes bedevilled by road works and closures. But the sun shone. We didn't care.

At Gretna we took the old A74 that runs beside the motorway and continued north in peace until Beattock where we stopped for lunch and learned far too much about the likes and dislikes of the loud mum and her offspring, James, at the next table. Maybe my dazed state explains another wrong turn that led to Hyndford Bridge, Lanark, and a humungeous traffic jam, fortunately mostly in the other direction. But the sun shone. We didn't care.

Not until we found our way back to the old A74 and encountered gridlock – not a complete surprise after passing above an empty M74 – and the reason for all the earlier traffic. Matchgirl's smartphone furnished the explanation – a tanker fire had led to closure of three or four junctionsworth of motorway. We were lucky. A few minutes of crawling got us on the M74 where we sped north at 70mph and pitied the nine miles of traffic edging towards the first diversion. And the sun still shone. But we did care a bit as time was getting on.

At 5pm we took a comfort break at Stirling Services, ahead of the long drive up the average speed camera-controlled A9; getting on for 7pm we stopped for dinner at Ballinluig; at 9.20pm, almost twelve hours after leaving Grasmere, we arrived at The Rural Retreat and marvelled at how much the grass and weeds had grown. Despite that, it was good to be home, even if The Pride didn't seem to care.

The only snaps taken yesterday were some souvenir shots before our departure. 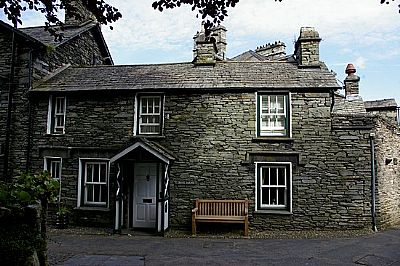 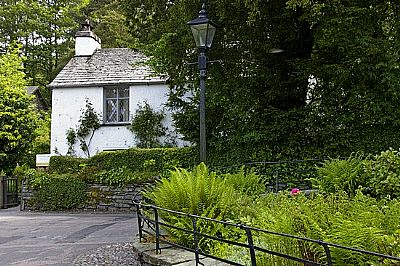 Dove Holme Cottage (left), our home for the week, and Dove Cottage, beloved by Japanese tourists.