For a long time we've criticised the owners of local moggies who bully The Pride, steal food put out for pine martens and are generally vagabonds and thieves. Then Matchgirl discovered that at least one member of The Pride is no better.

She first became suspicious when Maia, the always-hungry black cat, brought prey home to The Rural Retreat. After a brief wrestling match she prised the victim from the jaws of the growling hunter and discovered... a lump of cheese. Cats like cheese.

Matchgirl's first thought was that the ravenous beast had been raiding bins again, but a while later she glanced out of our rear window, from where can be seen the back door of our nearest neighbour, and observed a black shadow disappearing through a strange cat-flap. Shouting brought a guilty moggy out of the house and back home where the error of her ways was pointed out to her.

The effect didn't last long, however. The larcenous feline was seen sidling up to the distant door on two more occasions, to be foiled by Matchgirl's shouts. But cats can't be watched all the time. More cheese fell victim to the dairy-loving delinquent. 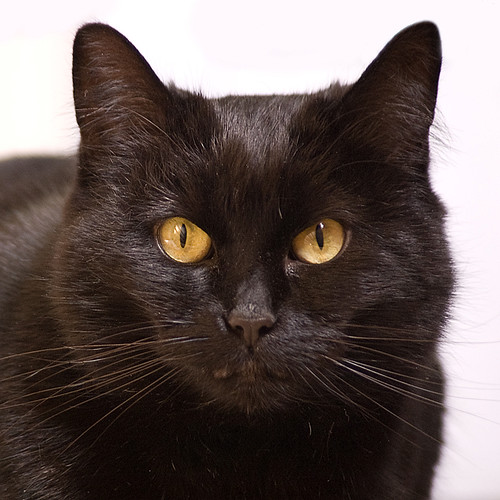 Portrait of an untrustworthy cat

No lights were on in the burgled home, so we decided not to rouse its occupants from slumber. Instead, I blocked the flap (there's currently no cat in residence there) with the parcel shelf that belonged to Senor Seat and is now used for kneeling purposes during gardening.

Some time later, we watched a disconsolate puss pace up and down outside the door, clearly wondering how to overcome the obstacle. There's a good chance she'll have done so before the night is over, especially if The Fearless Ones join her criminal endeavours, then we'll have even more apologies to make to our neighbours. Cats will do anything for cheese.

Good News Round-up: Son of Seat passed his MOT with no trouble and I've mended the wireless link between the Mac and the netbook. I knew you'd be fretting.