Looking Forward To A Sunny Future

October's almost over; the lawn is full of leaves, willow branches and the aftermath of the most recent almost-flood; the prospects for the next few months are grey, damp and cold. But I've got sunshine to come: yesterday I booked my flights, reserved a room at the Gatwick Hilton and paid my deposit for what will be the final Menorca photography holiday run by PhotoActive Philip, who's coasting towards retirement.

Matchgirl, who still doesn't consider snappery a spectator sport, will stay home with The Pride. Shame. She also wants nothing to interfere with next year's training, which may see her step back up to marathon mileage. Rather her than me.

As my meagre savings have dwindled alarmingly it's fortunate that City Limits is in action tomorrow and expects to be busy next year. However, first we have to raise the cash to get the band Transit van through its MOT – something revealed to me yesterday by Keith who was rather shamefaced about asking me for money less than a week after I played my first gig. At least this means I now have an official quarter-share in all the band gear. I also learned that the gigs I'd been told were at The Room are in fact at Johnny Foxes, where it must be at least seven years since I last played. It's probably not changed a bit.

Tonight's rehearsal was scratched because singer Ashley is in Bristol – she gets about – so by the time the gig's over I'll have performed longer with the band than I've rehearsed with it. Good job I'm a pro. The gig's at the Bandstand Bar in Nairn if you've nothing better to do, curtain up at 9.30pm. 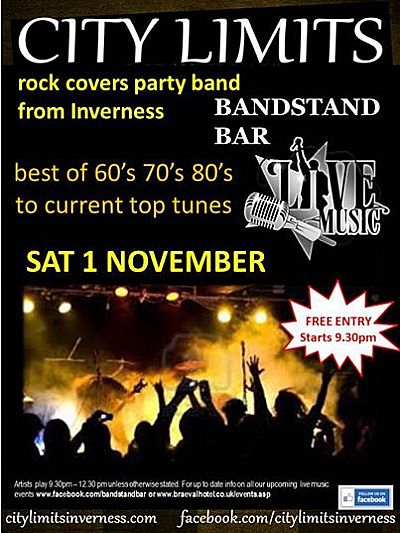