A Difference Of Opinion

Matchgirl and I see eye to eye on most things (apart from her distressing fondness for low-grade daytime television) but our views do diverge occasionally, which is why tonight I find myself alone in The Wheatsheaf at Carperby in the Yorkshire Dales while she is home keeping watch over three hungry moggies.

It's not the Dales about which we disagree – she'd be delighted to revisit God's Own Country – rather, my ultimate destination, for which this picturesque hostelry is just a staging post (reached after 236 wearisome Scottish miles, far too many of them on the A9, and exactly 100 remarkably and surprisingly swift English miles. Traffic and roadworks simply disappeared south of Carter Bar; it's probably a plot to discourage further hopes of independence).

Tomorrow, my journey concludes in the salubrious county of Warwickshire, amidst the Georgian and Edwardian elegance of Leamington Spa where Bike Club Richard will return some of the hospitality extended to him inside The Rural Retreat. Matchgirl has no problem with neither Richard nor Leamington; it's what we have planned for Wednesday evening that's kept her at home because (whisper it) she doesn't find Jasper Carrott funny. 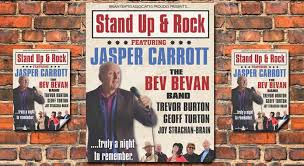 I know. This is difficult to understand, unless she bases her opinion solely on his TV spoof The Detectives. As a stand-up he's one of the finest: the best show I've seen, of any kind (and that includes Queen at Knebworth and Cherie Lunghi at the Royal Shakespeare Theatre) was Jasper at York Opera House. It really is possible to laugh until it hurts. So Matchgirl's lack of enthusiasm was a bitter blow.

Despite that, I've high hopes for Wednesday night. I also had high hopes for some Dales snappery tomorrow, but the weather forecast suggests that I shouldn't hope too hard. Such is life. And then there's the A9 to traverse again on the way back, possibly for the last time before the average speed cameras between Perth and Inverness are turned on and a horrendous road becomes even worse.

But it's worth it for Jasper, even if he didn't want to tour much beyond the Midlands. I'll forgive him if he makes me laugh as much as last time.

Music Update: The Mystery Band, which was to make a decision about its new bass player last Wednesday, then last Sunday, will make an absolute, definite and final decision tomorrow. We'll see.