It's been a long time since I've seen more than a Bushnell snap of pine martens in the garden, so today was a red letter day.

The Bushnell caught a mustelid visitor between 10.30 and 11.30 last night (followed an hour later by Mystery Moggy) so tonight I made sure to keep an eye on a gate covered liberally in Nutella, nuts and raisins.

My patience was rewarded at 11.30 – far too dark to take snaps, but with the aid of the outside light I was able to take a good look at a leisurely diner who gave me no more than a couple of dismissive glances. I'd almost forgotten what a pleasure they are to watch.

When the gate was licked clean she (I think) loped across the garden and up The Nutella Tree (which is regrowing strongly) to enjoy her second course. With luck, early visits and later nights will combine to provide snappery opportunities – most likely for Soo and Tony the cat-sitters when her latest sporting endeavour takes Matchgirl and me to Iceland in a few weeks' time. I won't grudge them the views. 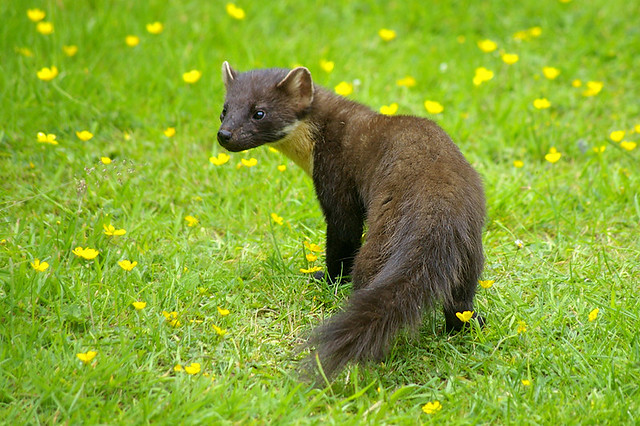 One from the archive – with luck there'll be new snaps soon

Every member of The Pride, I'm happy to say, is now fit, well and hungry enough to eat their regular food. The bonus is that I get to eat the roast chicken bought this morning when we mistakenly believed Pandora needed something special to get her gastric juices going. Her relapse, Dr Vet believes, was probably brought about by the death throes of the worms inside her killed by the medication administered yesterday. Nice.

The full feline recovery is timely, for today Matchgirl drove to Stirling to take part in a chi running training camp as part of her half-marathon preparations. She can enjoy a worry-free weekend and I won't have to juggle three different diets for three fussy moggies.