Three days to go until Half Marathon Matchgirl and I fly away to (hopefully) sunnier climes, so there's been some intensive Chatterbox activity in the last few days.

This morning, all the pages I'd skilfully crafted were assembled into one file then converted into the pdf which this afternoon I uploaded to the John Bull Printing Press at Chatterbox HQ. The buttons pressed, I sat back and waited for the test copy to be spewed forth.

The result was not impressive.

I knew I was taking a chance with the cover picture, which I'd cropped from a landscape shape into portrait to fit the magazine's dimensions, so I wasn't totally surprised by the outbreak of pixilation that marred my carefully designed front page.

Consequently, I returned later in the day after committing some digital jiggery-pokery on the Mac. The results were no better.

So I admitted defeat. My third attempt at an eye-catching cover features a landscape-shaped snap blended into a solid-colour background. And here it is... 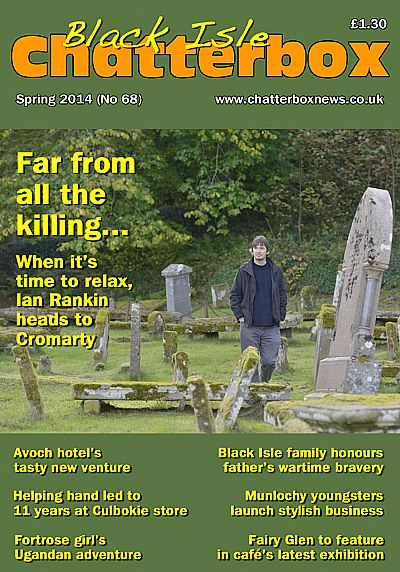 It's not often we have an international literary superstar on the cover of Chatterbox so he deserved a bit of effort. Another test copy will be printed tomorrow, after which – all being well – the Chatterbox print team will be able to leap into action and get the Black Isle's favourite quarterly read on the streets sometime next week.

Even without Ian Rankin it would still be a cracking edition, and all for only £1.30. Don't miss your copy.

Gives it a lovely digital antique look which no doubt goes well with the John Bull :-)
Comment from Russell at 23:35 on 17 February 2014.
And with the use of Photoshop 6 (that's 6, not CS6) from 1999. Twentieth century technology at its best.