Fame In The Netherlands

Being part of the wonderful worldwide interweb means receiving the occasional unexpected request. The result of one such request means that a snap of mine is to appear in a Dutch whisky enthusiasts' magazine.

The inquiry came from part-time whisky journalist (and full-time dentist) Marcel van Gils who needed a snap typical of the Black Isle area to illustrate a piece he's writing about a distillery planned hereabouts. No, I'd not heard of it either.

By chance he came to my website. A brief email exchange ensued at the end of which I agreed to let him use a tasteful view of Ben Wyvis, Cromarty Firth and Castle Craig. 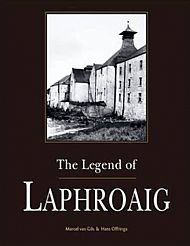 No money will change hands, unfortunately, but today Mr Postman delivered a pristine, signed copy of Marcel's opus The Legend of Laphroaig – a £35 coffee table book published in The Netherlands but written in English. A wise sales decision. I've also been promised a copy of the magazine when it's out and to be kept informed about the distillery plan.

That could be a scoop for a forthcoming edition of Chatterbox, although not the Winter number which should be ready to put to bed at the weekend – if I complete the final pages in time. There might be few distractions because the first light dusting of ground level snow fell tonight. It didn't last, but the temperature's sub-zero and the forecast gloomy so at least I'll have something to keep me occupied if we're snowed in.

The Pride must feel a change in the air. Willow and Maia have been playing tag and this evening The Fearless Ones reprised their kittenhood by diving down the back of the cooker in search of excitement. Maybe there will be a few distractions after all.