A Bit of a Tumble

Twenty seconds is all it takes to ruin all your plans . . . 20 seconds and a gravel-strewn bend.

Until then everything had been fine: quiet roads, good weather, great scenery. Now I was lying in the middle of that quiet road, swearing to myself, gazing glumly at the bits of motorbike scattered around me and wondering how much worse the ache in my shoulder would get.

The good news was that all my appendages appeared intact, nothing was bleeding, I was conscious and, as I was riding solo, there was no pillion passenger to worry about. So I fretted about the bike instead, and whether I'd be fit to play bass with my band when I got home to Maryburgh, if I got home. Strangely, I didn't worry about work.

By now the two cars I'd passed only moments before and another travelling in the opposite direction had stopped to help. I struggled out of my helmet and to my feet, despite the concerns of the Good Samaritans who'd phoned for police and ambulance. "I don't need an ambulance," I thought, but didn't say. "Just help me get the bike out of the ditch."

Sanity prevailed and before long I was stretched out on the grass verge, my now well-scuffed leather jacket for a pillow, protected from the sun by one of the Samaritans who held an umbrella over me while we listened in vain for the sound of sirens. My holiday wasn't going well.

I'd left the Highlands six days earlier to stay with my folks in Yorkshire for a few nights, reacquaint myself with roads around the Dales, then spend a couple of days in Northumberland where I found myself cruising around the back roads with no definite destination in mind. Alnwick Castle sounded interesting so I threaded my way along the B roads to reach it and found a patch of gravel instead.

Gravel, like spilt diesel and blind Volvo drivers, is one of the occupational hazards of bike-riding, especially on the roads I like, so I'd come across plenty in the past and stayed upright. What was different this time I don't know; the bend wasn't tight and I was doing barely 50 mph, yet within seconds of feeling my back wheel slide I was riding on the grass verge, and a few seconds after that was lying on the road.

My greatest concern, of course, was my bike. It's a Kawasaki GTR - that's a big, black, 1000cc tourer - and we've been together since 1999 when I bought it second-hand after my previous steed, another GTR, suffered a terminal engine malfunction while doing a ton plus on the Achnasheen to Garve road. (That's kph we're talking about, officer, honest.) We've done many miles since then and I was looking forward to taking it round the clock sometime next year.

At 13 years old, almost 90,000 miles on the clock and worth less than £1,000, comprehensive insurance is pointless: they'd write it off if I scratched the front mudguard and had the cheek to claim. Musings by the Samaritans that the local garage might use a hook to drag the bike out of the ditch didn't make me feel any cheerier.

When you're six foot six the choice of machines is severely limited unless you don't mind a bad back and looking like a prat on a tiny sports replica, and as I'm not fat or hairy a Harley Davidson is also out.

The idea that I wouldn't be back on two wheels as soon as possible wasn't even considered.

By now the police had arrived. They ascertained I wasn't about to die, took my details in case Northumberland County Council wanted to sue me for defacing its tarmac, then left me to the Samaritans while they set up traffic warning signs. I heard one of the Samaritans telling them how carefully I'd been riding when I'd overtaken their car, which was a comfort. I wouldn't be prosecuted for reckless cornering, then.

The ambulance joined us shortly after that. The paramedics took the same details I'd given the police, cut off my sweat shirt and T-shirt so they could get a look at my shoulder, put a neck brace on me just in case, strapped me to a stretcher and lifted me into the ambulance. Two minutes later they took me out again because the air ambulance had landed.

I didn't need airlifting - there was no doubt that my injuries weren't that dramatic - but earlier there'd been an accident on the nearby A1 and, it appeared, the helicopter was now at a loose end, so after a brief ownership dispute between the two sets of paramedics I got the benefit. The sights of my first helicopter ride featured the roof of the cabin and little else. Such is life.

Ten minutes later I was wheeled across what felt like a cobbled driveway into Wansbeck Hospital in Ashington, a few miles north of Newcastle. I looked forward to being soothed by pretty nurses. Instead, after confirming my details, I was left strapped to my stretcher to contemplate the corridor ceiling while victims of the A1 pile-up got priority treatment. 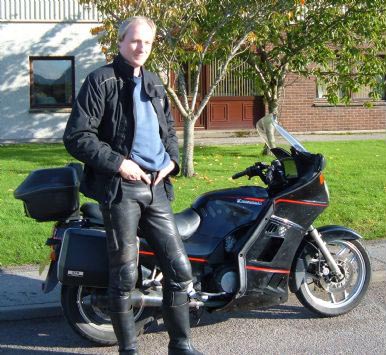 Eventually I was pushed into a cubicle, the neck brace and other assorted restraints were removed and a doctor peered at me before I took my turn in the queue for X-ray where I was surrounded by outpatient pensioners and a couple of the pile-up victims. A long while after that, back in my cubicle, the doctor confirmed I'd broken my right collarbone but all else was intact. The holiday wasn't improving, and still no pretty nurses.

This wasn't my first accident, which isn't a surprise after 28 years of biking and - of more relevance - more than 250,000 two-wheeled miles; after 14 years since the last close encounter with tarmac it was long overdue. On that occasion, during a bike club run, I stopped at a roundabout and the bike behind me didn't, resulting in a broken fibula for me and insurance policy trauma for him. We 're still friends.

My only other real accident was 18 years ago when I turned a corner in the Dales to find a geographically-challenged tourist making a three-point turn in the middle of a narrow road. I broke my left collarbone, the bike was written off and the tourist paid the bill.

Yes, bikes can be dangerous, but so can cars. Ask the drivers in the A1 pile-up. The only way to be totally safe is to stay at home - but keep out of the kitchen and forget the DIY. I digress.

I was given a sling and a pocketful of painkillers and taken to a small recovery ward where I could be kept an eye on for an hour before being released.

Where I would go was a problem: I was in Ashington, the bike was now 10 miles west in Morpeth and my hotel room was 70 miles north in a little village near Jedburgh where public transport is only a distant memory for its inhabitants. The RAC was unable or unwilling to join the dots; the NHS sprang into action.

While I ate my first hospital meal for a long time (and very good it was too) one of the nurses found me a B&B in Morpeth and a taxi to get there. The Cottage View Guest House conjured up images of a thatched roof, roses round the door and an apple-cheeked old granny as owner who'd fuss round me and feed me fruit cake. The reality was a medium-sized, impersonal Travel Lodge-type place. I took a large brandy to my cell and spent the evening watching TV while trying to keep my arm comfortable and forget about the much better empty room 70 miles away which was costing me the same money.

Next morning a short taxi ride took me to the garage that had retrieved my bike from the ditch and been subcontracted by the RAC to take the two of us home.

The bike was already in the back of the Transit, I was told, so I went to examine the damage and found my old friend lying on its injured side on top of two tyres and a carpet which, in theory, would stop it sliding about during the journey. I wasn't happy, and was even less so after having to pay £120 to the garage for recovery of the bike.

At least the Transit driver, who didn't work for the garage, was sympathetic and willing to take me back via my hotel so I could pick up my gear. During the seven hour journey home I tried to ignore the bangs and squeaks that echoed around behind me, telling myself that vans are naturally noisy. The jovial driver tried to take my mind off my worries with the news that the helicopter trip could cost me £900. At this rate my week in England could cost me the same as a fortnight in Australia.

Last stop before home was RM Motors in Muir of Ord where Kenny, the bike mechanic, had decently agreed to stay open late to take delivery of the wreckage. When I finally got a proper look at the damage it wasn't as much as I'd feared - a couple of bits that could be replaced and a fairing that could be patched up. The bike would live!

Finally, here's a tip for anyone acquainted with a battered biker. "How are you?" and "What happened?" are perfectly acceptable opening inquiries.

Everyone got that right. The third question should be "How's the bike?" and not (usually delivered with a knowing smirk) "So you'll be sticking to the car in future?"

Those who ask the correct question know what's important. The rest, however much you try to explain, will simply never understand.